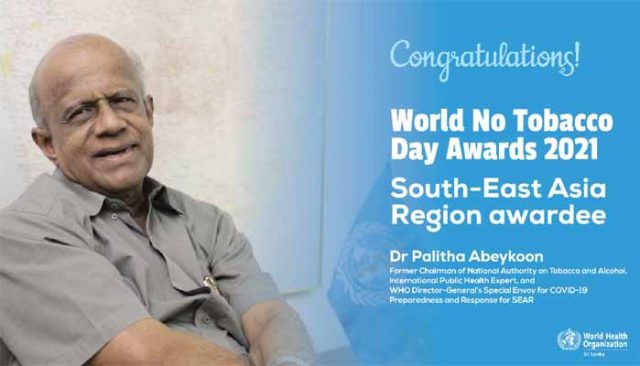 In recognition of his extraordinary contribution to combatting harmful tobacco use, Dr Palitha Abeykoon, Former Chairman of National Authority on Tobacco and Alcohol in Sri Lanka, International Pubilc Health Expert, and WHO Director-General Special Envoy for COVID-19 Preparedness and Resonse for SEAR, was named one of the South-East Asia Region WHO World No Tobacco Day 2021 awardees.

Sri Lanka was one of the first countries in the world to ratify the Framework Convention on Tobacco Contro (FCTC). Sri Lanka was also one of the first countries in the region to adopt a tobacco control law in line with the Articles of the FCTC, the National Tobacco and Alcohol Act of 2006, which led to the establishment of the National Authority on Tobacco and Alcohol (NATA). This law also banned all forms of tobacco advertising and sponsorships, prohibited sales to those under 21 and sales through vending machines, and declared most public places smoke-free.

When Dr Abeykoon was appointed the Chairperson of NATA in 2014, he formed crucial partnerships with the government public health network and enforcement agencies such as the Sri Lanka Police, Customs, and the Department of Excise to strengthen enforcement of tobacco control laws. He also formed a close relationship with Civil Society and Non-Government Organizations to boost advocacy and conduct community-level programmes and interventions related to tobacco reduction.

Dr Abeykoon’s contribution to reducing the harmful use of tobacco and alcohol in Sri Lanka is immeasurable; however, some of the outcomes of his work through NATA are as follows:

Through the achievements listed above, and countless others, Dr Abeykoon’s efforts significantly contributed to the drop in cigarette sales in Sri Lanka by approximately 15% during his tenure at NATA. Dr Abeykoon was instrumental in obtaining support from WHO to establish the Centre for Combating Tobacco, the WHO-affiliated tobacco industry observatory in the University of Colombo, Sri Lanka. Dr Abeykoo also successfully advocated for pictorial health warnings in 2015, resulting in Sri Lanka’s recognition as the first country in the WHO South-East Asia Region to agree to the Protocol to Eliminate Illicit Trade in Tobacco Products. The WHO Sri Lanka Country Office looks forward to continuing work with Dr Abeykoon on crucial public health issues.

The WHO South-East Asia Region continues to take evidence-based action to reduce tobacco use among all demographic groups, in line with its Flagship Priority on preventing and controlling noncommunicable diseases  (NCDs) and WHO’s year-long global campaign to help 100 million people quit tobacco. Globally, tobacco use kills 8 million people every year, including around 1.2 million who are exposed to second-hand smoke. The Region accounts for an estimated 81% of global smokeless tobacco users, 22% of global adult smokers, and more than a third of the world’s children aged 13 to 15 years who use tobacco. In December 2020, WHO launched its “Commit to Quit” campaign, which aims to empower policy makers to create healthier environments that are conducive to quitting tobacco, for example by increasing access to cessation services. Amid the COVID-19 pandemic, millions of people in the Region and world want to quit tobacco, and must be provided every opportunity to succeed, including through the delivery of innovative m-health and e-health initiatives.

The Region has in recent years made targeted efforts to reduce tobacco use, with a focus on implementing high impact, cost-effective “best buys”. All countries have implemented evidence-based tobacco control laws and continue to apply the WHO MPOWER package. In 2018 Thailand became the first country in Asia to adopt plain packaging, which several Member States are now considering. DPR Korea, Nepal, India, Thailand, Timor-Leste and Sri Lanka have banned the use of Electronic Nicotine Delivery Systems (ENDS), and Maldives regulates ENDS the same as any other tobacco product. The Region continues to collect high quality data on tobacco use in more than 99% of its population, achieving the highest data coverage globally. All countries are committed to fulfilling the WHO Framework Convention on Tobacco Control and to achieving the targets identified in WHO’s Global NCD Action Plan and Sustainable Development Goal 3a.

There has never been a better time to quit. COVID-19 is an infectious disease that primarily attacks the lungs. Smoking impairs lung function, making it harder for the body to fight off coronaviruses and other diseases. Tobacco use is also a major risk factor for NCDs such as cardiovascular disease, cancer, respiratory disease and diabetes – conditions that put people with COVID-19 at higher risk of developing severe illness. The act of smoking increases the frequency with which a person touches their mouth, which facilitates virus transmission. So too does the act of chewing or lodging tobacco, which also causes users to spit. Within 20 minutes of quitting tobacco, a person’s elevated heart rate and blood pressure drop. After 12 hours, the carbon monoxide level in their bloodstream reduces to normal. Within 2–12 weeks, circulation improves and lung function increases. After 1–9 months, coughing and shortness of breath decrease.

We must seize the moment and accelerate the Region’s downward trend, with a focus on several priorities. First, ensuring all countries develop and implement comprehensive tobacco cessation strategies that are accompanied by national technical guidelines on the management of tobacco dependence. Such strategies and guidelines will supplement multisectoral NCD action plans, providing policy makers and facility administrators additional support in implementing tobacco control interventions. Second, increasing access to tobacco cessation services such as toll-free quit lines and nicotine replacement therapy, especially in public facilities. Ongoing efforts must be made to integrate tobacco cessation services into primary health care, where most people’s health needs are met. Third, engaging civil society at all levels and raising awareness of tobacco industry tactics. And fourth, leveraging the full power of digital technologies, including mobile phones and artificial intelligence (AI). WHO’s AI-developed digital health worker, Florence, can help build a person’s confidence to quit, make a plan, and recommend toll-free quit lines or apps.

Our success will not only save lives; it will also save resources. Tobacco use is a major drain on health expenditure and workforce productivity, costing the world US$ 1.4 trillion every year. By strengthening tobacco taxation policies, countries can reduce tobacco consumption and expenditure, while also increasing revenue. Such revenue, if allocated towards health, will help countries in the Region and beyond achieve a health and economic recovery from COVID-19 that is more equitable, resilient and sustainable. On World No Tobacco Day, WHO reiterates its commitment to supporting all countries in the Region to implement strong tobacco cessation policies; increase access to tobacco cessation services; enhance awareness of tobacco industry tactics; and empower tobacco users to quit. The tobacco epidemic continues to burn. We must extinguish it now. 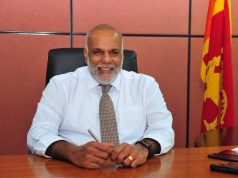 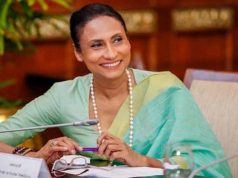 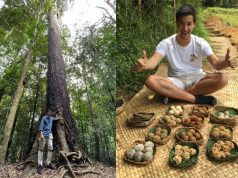 Export Performance for May 2021 and the period of January –...