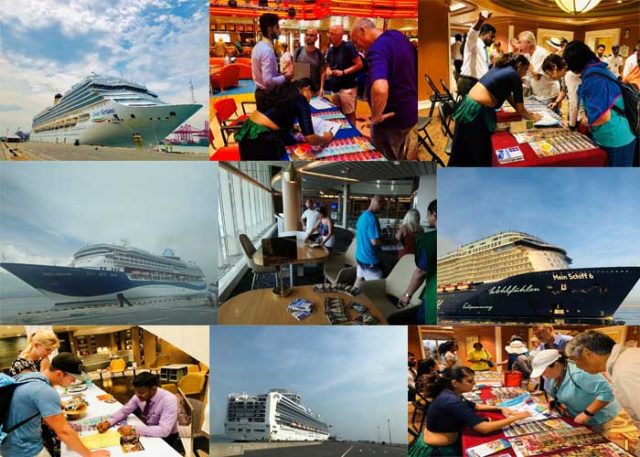 The months of November and December were frequently marked with passenger cruises arriving from different parts of the world, and adding further to the number of tourist arrivals in Sri Lanka this year. Several cruise liners arrived during the past few months, including ‘’Costa Fortuna’’, ‘’Marella Discovery’’   Sapphire Princess’ ’and ‘’Mein Schiff 6’’ to name a few. The visits of these passenger cruises were added contribution to the tourism promotional activities carried out by Sri Lanka Tourism.

‘’Costa Fortuna’’ the majestic and gigantic looking Italian cruise liner, docked at the Colombo Port on the 25th of November 2019, with 2500 passengers on board. The visitors were given a warm welcome by officials of the Sri Lanka Tourism Promotion Bureau. (SLTPB) A Traditional dance troupe which was organized by the SLTPB along with the welcome, kept the visitors mesmerized with their spectacular performance & glamour. The ground handling was done by Lotus Destination Lanka (Pvt) Ltd, while Aitken Spence made their contribution as the Sri Lankan shipping line. During their stay the passengers of the cruise liner visited various tourist attractions of Sri Lanka, including Akuressa Tea Plantation, Bentota, Hikkaduwa, Negombo, tea plantations, Temple of the sacred tooth relic, Kandy, Mount Lavinia beach, Colombo city attractions and shopping in Colombo.

The vessel started its journey Genoa, Italy on 08th November 2019, where it ended its cruise on the 10th of December by reaching Singapore as its final destination. The vessel carries mostly Italian and German passengers and can carry a capacity of 3400 passengers. Currently it has 1100 crew members and is 893 ft in length, built in 2003. It has a wide range of facilities built especially for high spending tourists who want to have the best   vacation worth their expenditure. The vessel is adorned with 3 restaurants, (Michaelangelo restaurant, Raffaelo restaurant, Cristoforo Colombo buffet restaurant, and club Conte Grande a la Carte restaurant) it includes 11 bars, 3 swimming pools, 4 Whirlpools, Club Salute Saturnia Spa and Gym, Sports court and jogging track. It has its own exquisite options of entertainment such as a Cinema Theater, card room, internet point, meeting room, shops and a medical center.  Cruise arrivals have been on the rise with Sri Lanka being promoted as a safe and an ideal tourism destination for the enthusiastic traveler, and several luxury vessels have called at port up to December, showcasing the importance of Sri Lanka as an interesting stop by to explore a different culture and a different destination.

Another luxury cruise liner which made her call was the gigantic ‘’Sapphire Princess’’ belonging to the ‘’Princess Cruises’’ shipping line, having the capacity of bearing 3100 passengers on board. Originating from Bermuda, the Sapphire Princess started her journey from Southampton, England, on 31st October 2019.  The visitors on board was given a wonderful welcome by the Tourist Information Centre officials of the SLTPB, as another passenger cruise welcome done by the SLTPB. She arrived in Sri Lanka on 02nd December 2019, and was scheduled to   travel to Kuala Lumpur, Malaysia, as her next stop. Most of the passengers on board consist of European, British and Thai citizens,carrying 1100 crew members and 952ft   in length. the ground handling agent for the vessel was Lotus Destination Lanka (Pvt) Ltd, while the Sri Lankan shipping line was Malship (Ceylon) Limited. During their stay they visited Sri Lankan attractions such as Akurassa Tea Plantation, Bentota, Hikkaduwa, Negombo, tea plantations, Temple of the sacred tooth relic, Kandy, Mount Lavinia beach, Colombo city attractions and shopping in Colombo.

This gigantic vessel which was built in 2004 has the ability to carry a tonnage of 115,875, has a wide array of plush modern facilities such 8 restaurants, 15 bars/café’s, 5 pools, Aerobics studio, Gym, Beauty Salon, Sports court and many more. There are many modes of entertainment which can be experienced such as a Cinema Theater, Internet café, Youth center, Teen center, shops Art gallery, Laundromat and a photo center.

Cruise arrivals play a crucial part in the tourism sector as they bring in high spending tourists who love to have an enjoyable vacation worth their expenditure. This is one way of promoting the destination as an island paradise filled with new adventures and experiences, sidelined with friendly, hospitable people and delectable authentic cuisine. By encouraging more tourist arrivals through passenger cruises, in addition to flight arrivals, this will be an important exercise of taking Sri Lanka around the world as a number one destination for a perfect island getaway.

The “Marella Discovery”, which is a former Royal –Caribbean Vision Class – Cruise Ship, now sailing for Marella Cruises called to port at the Colombo Harbor on the 30th of November, 2019, and left for Pulau we, Indonesia ,03rd December 2019.  Prior to 2016, she was operated by RCI as“Splendor of the Seas”. She was given a rousing welcome by the Sri Lanka Tourism Promotion Bureau (SLTPB) which also had a Tourism Information counter on board, to brief the tourists about their latest destination to explore, and the thrilling experience which they are bound to get.  They were able to gain a considerable amount of information and also about the major tourist attractions of Sri Lanka, by the colorful brochures, books, and maps handed over to them regarding Sri Lanka. The local shipping line was Aitken Spence Shipping Ltd, while the ground handling was managed by Aitken Spence Travel (Pvt ) Ltd. The visitors were scheduled to take a tour of local attractions such as Pinnawala, Bentota, Hikkaduwa, Negombo, tea plantations, Kandy tooth temple, Mount lavinia beach, Colombo city attractions and shopping in Colombo.

The majestic vessel carried 1500 passengers from all across the world, including Italy, Germany, Thailand and India. It has the total occupancy of 1800 passengers, and carries 750 crew members on board.

The second in the line of vision class ships, she features a seven story lobby, rock climbing wall and a 9-hole miniature golf course. This gigantic beauty consists of 11 decks, 918 Cabins ,7 Restaurants, 7 Bars, 2 Pools and 9 Lifts.   In modes of entertainment, it includes a Broadway show lounge, an open air cinema, and a rock climbing wall which captures a bird’s eye view of the ship and the ocean.The plush 5 restaurants will serve the best international cuisine which they have to offer – and it’s fully equipped with 2 pools , 4 whirlpools , Oceans Gym , Oceans Spa, Beauty salon, Jogging track , and offering many modes of entertainment such as  Broadway show lounge , Live Casino , Gamerzone , Kid’s club and a live lounge with stage.  Other facilities include shops, Photo gallery, Photo studio and a medical centre.

‘’Mein Schiff 6’’, originating from Finland, made her inaugural call at the Port of Colombo, on 21st of November, 2019. She was given a warm reception by Sri Lanka Tourism Bureau (SLTPB) officials, complete with a traditional dance troupe which provided entertainment with a captivating performance. The visitors were able to gain a considerable knowledge of Sri Lanka and its most highlighted tourist attractions by the brochures and tourist maps given by the Tourist Information Centre officials of the SLTPB. TUI Mein Schiff 6 is owned by TUI cruises which is a Germany based joint venture cruise company of TUI Group (British –German travel and tourism corporation) and RCCL (Royal Caribbean Cruises Ltd- US passenger shipping company.)

Further to commemorate her maiden call, a plaque exchange was also carried out between The SL Ports Authority and the Vessel’s Command. She arrived from Mumbai, India, having a passenger capacity of 2534, supported by a crew of 1030. This massive vessel is 295 m in length, and equipped with an 8.25 m draft. She has modern, up to date facilities such as 1250 staterooms, 15 decks, with Diamond Suites, large family staterooms and three several suite categories as new additions. The ability to do sports and the wide variety of fine dining options is also another feature which adds up to its uniqueness.

The visitors showed a major interest in the scenic locations of Sri Lanka and the rich culture and heritage it has to offer, complete with the delectable Sri Lankan cuisine.

M/S Shipping Agency services was the local representative for the vessel while the ground handling was done by Aitken Spence Travels. 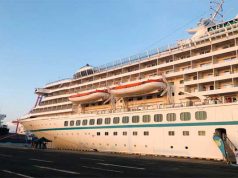 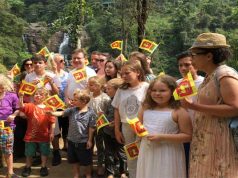 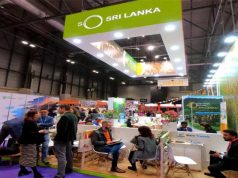