Seven months after the Easter Sunday carnage, Sri Lanka’s tourism industry is still struggling to recover from the fallout of the devastating terror attacks, which plunged this critically important economic sector into depths of despair.

Five-star and boutique-style hotels also suffered a crippling blow with occupancy still hovering around a marginal 37% – hardly adequate to cover existing overheads. However, the position of these luxury properties in no way reflects the overall ground situation in the tourism industry.

Far more pathetic is the plight of the assortment of 2-star and 3-star hotels, and guest houses spread across the country. They are now in total disarray. This category of middle class accommodation depends largely on direct inquiries through online platforms such as EXPEDIA, BOOKING.COM, AGODA or AIRBNB to name a few.

A survey conducted on middle class hotels and guest houses in Sri Lanka by AGSEP Research – an Institute, which provides services and data to international universities, the outcome was less promising. The forthcoming high season in the western coastal belt looks grim with cancellations of more than 50% reservations in comparison with last year’s performance.

A few Sri Lankan hotels in the upper class segment are still performing quite well, thanks to their contractual partners overseas, with leading tour operators such as TUI, Meiers Weltreisen and others continuing to tap markets in Europe. They provide bookings for some of the top Lankan chains such as Jetwing, John Keells etc. This category was also hit by the downturn, but in a more mild manner.

Sri Lanka’s hospitality industry, in terms of numbers, concentrate more on provincial areas and the coastal belts, which offer budget rates to travelers. This sector has been badly affected by the downturn and is fighting a lone battle to keep their businesses going.

As reiterated in my previous articles, the Tourism Ministry has so far been unable to tackle the exorbitant airfares from Europe to Sri Lanka. First-time travelers from Europe could become ‘repeaters’ if reasonable airfares are offered, but unfortunately, there is still no sign of seeing any meaningful efforts to take up this important issue directly with the International Airlines concerned.
It would have been a promising step to directly invite the heads of Emirates, Qatar, Ethihad, Oman Air and Turkish Airlines, the major carriers from Europe to Sri Lanka, for a discussion to sort out the question of costly airfares to Colombo.

The Minister of Tourism could have made this a priority ‘must do’ on his calendar as exorbitant airfares are a disincentive to prospective European travelers. There is sufficient room for airlines to offer airfares in the range of 450 to 500 Euros per traveler to Sri Lanka, which is already on offer for other destinations such as Bangkok, Kuala Lumpur and Vietnam. The Minister should intervene in this matter, and this has to happen swiftly before Sri Lanka’s tourism industry slides further down the precipice.

Sri Lanka’s tourism is still struggling to achieve an annual 2.3 million tourist arrivals target, while being outperformed by Vietnam, which has reached a remarkable 10 million tourists so far this year. Thailand and Malaysia are eying 40 million annual arrivals by the end of 2019.

The Tourism Ministry should take meaningful steps to invite the airline bosses to Colombo and work out reasonable airfare structures from Europe, which was at one time the major market for Sri Lanka, but has witnessed a drastic drop in recent times. The high-end spenders are the Europeans, and at the same time, more Europeans tend to do their bookings online avoiding tour operator services. This was one of the key factors which led to the recent collapse of the tour operator giant Thomas Cook.

The positive ‘BRING A FRIEND TO SRI LANKA’ initiative involving celebrities from the sports field launched recently is certainly a step in the right direction. However, much more needs to be done to bring Sri Lanka’s tourism to the height it deserves. The country deserves it, and people who make a living out of the industry also deserve it to the maximum.

There is no reason to suggest that Sri Lanka cannot achieve eight million tourist arrivals during a period of three to five years. This number would result in a significant contribution to the GDP in the range of approx. 60% per annum. It would also enable Sri Lanka to loosen the grip the IMF, World Bank and other international lenders have on the country.

It is, therefore, prudent to make a collective effort to develop Sri Lanka’s tourism exactly for this reason. It will be wonderful if Sri Lanka can free itself from the clutches of international lenders by making use of the tremendous assets this beautiful island has to offer.

(The writer is a key German investor, tourism promoter, researcher and social scientist based in Sri Lanka). 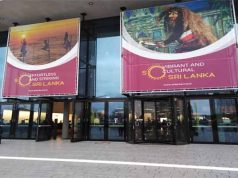 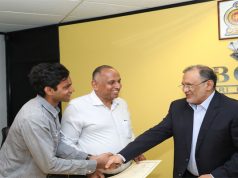 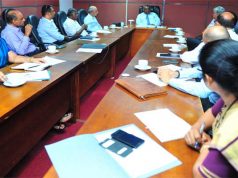 Knitline Apparels (Pvt) Ltd signed an agreement with the board...