The first ever initiative of Sri Lanka Tourism’s effort in showcasing the island’s wildlife to the world through streaming technology is an unprecedented success with the support of the stakeholders, partners and wildlife enthusiasts from all over the world. The event was backed by Sri Lanka Tourism’s largest online marketing initiative in the year 2020.

Overall, as at date the campaign generated over 22 million impressions, over 1.7 million video views and generated over 40,000 clicks. The campaign was implemented on platforms such as Facebook, Instagram, YouTube, and Twitter. Direct display advertising campaigns were carried out using Google Display Network and Trip Advisor. Couch safari was advertised using both video and display advertisements on top Travel. Wildlife, Destination websites and YouTube Channels.

The viewers actively engaged with the program by asking questions from the experts and having them answered in real time. This not only made the event an enjoyable one, but also an educational experience for viewers of all age groups. The program opened the eyes of many to the diversity of Sri Lanka’s wildlife.

Sri Lanka Tourism also conducted a competition for foreign viewers titled ‘My Sri Lankan Story’ allowing them the opportunity to win a free holiday in Sri Lanka. This competition also received a great response from viewers as well as the local hoteliers who came forward to sponsor hotel stays for the winners.

“I wish to express our gratitude to the wildlife experts, the camera & production crew, industry stakeholders and partners who supported us promoting the event and most importantly the local and international viewers who joined the “Couch Safari”. This was a great example of achieving success through team work, with the best interest of the country at heart. This event provided us some great insight on the importance of Sri Lanka’s natural environment and that wildlife can be integrated to generate tourism income for the country. We hope to extend this program to other national parks and tourism segments as well in the future” stated Kimarli Fernando, Chairperson Sri Lanka Tourism thanking everyone who supported the event. 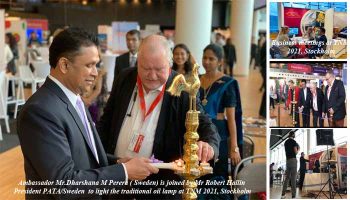