Beeralu or lace making can be considered  as one of the important aspects of Sri Lanka’s heritage . It has  long been regarded as a traditional craft of our country. Although a legacy of the Portuguese and the Dutch  colonization it is now part of our own culture and has a history of over 600 years.

Beeralu craft which is a  cottage industry especially down south has received worldwide recognition and is one of the specialities many tourists earnestly look for. Locals and foreign tourists flock to these villages in large numbers to watch these housewives working  on these  intricate lace making designs.

The southern coastal area in Sri Lanka was famous for its beautifully crafted beeralu lace. Many housewives engaging in this traditional craft had inherited the knowhow from their ancestors.

Beeralu weaving was popularized in Sri Lanka after the Portuguese invasion in the 16th century. Later the Dutch also contributed in developing the Industry. Even though the Portuguese and Dutch periods were the golden age of the Beerlu industry in Sri Lanka, it is considered that the Malays who arrived here from Indonesian islands and the Malay region, were the first to introduce the craft to the island. Ancient kings and their queens appreciated Beeralu lace profusely. The book titled “Beeralu lace in Ancient Ceylon” says the history of Sri Lankan Beeralu industry dates over 600 years. In the past, weaving beeralu was a way of showing skill, a hobby and an extra earning for village womenfolk.

The southerners on the other hand find the roots of beeralu to Queen Kuveni who is believed to have woven lace seated at a rock bobbin on the Island of the She-Devil off the southern coast in Sri Lanka (also rumoured to be haunted!).

However, all of these stories have not been proven true and each community and group that engage in the handcraft have theur own version to it. This is a tradition which is coming from mother to daughter from many generations

The process of Making Lace 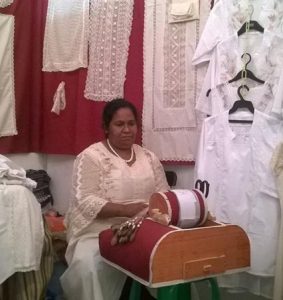 The process of making beeralu—though fascinating to watch—requires a lot of time and effort. First, the pattern of the lace is hand-drawn on graph paper, marked with round head pins, and wrapped around a lace pillow. Afterwards, several lengths of thread are wound around wooden bobbins, and last of all, the threads are braided or woven around the pins, which ultimately form into a finished piece of lace. 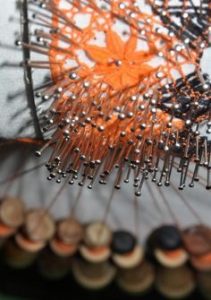 The use of bobbins is what gives the lace its name; in English, it is known as bobbin lace, and in Sinhalese it is called beeralu rende. The word beeralu is actually derived from the Portuguese word ‘bilro,’ which means bobbin, while ‘renda’ is the Portuguese word for lace.

The lace has a charm of its own, with its intricate detailing, and is a valuable material in the textile industry, because it is purely handmade, and the process is a traditional method of weaving lace.

Prior to starting work on the craft, the particular design is drawn on a graph paper (Koiru/ ispisalaya). It is then attached to the kotta boley with pins inserted on the entire design. The weaver then takes the thread around the pin manually, using beeralu to form various knots to create the design outlined on the graph paper.

It is during this process that elegant pieces of beeralu lace take shape. As the crafting continues, the weaver is seen rotating the small pillow (kotta boley) to gather the lace strips around it. The number of beeralu used for weaving varies depending on the pattern, while the threads used for weaving can be white or coloured, or a mix of both.

Most often beeralu lace is created in long strips and these strips are then attached together to create various items such as table mats, shirt collars, coasters, blouses, etc., as weaving these items straight away can be time consuming.

M.B. Priyani, an enterprising woman from Galle sees the lace making tradition in the South and particularly in Galle as “a hand spun legacy.”

An enterprising lady, M.B. Priyani saw the potential in this delicate yet showy craft. She would go from house to house and collect the   lace   items   from   these traditional lace makers and use them as insertions in a range of decorative linen items, thus, Thilini Lace business venture was born. She decided to start her own lacemaking business because she had knowledge of the craft of beeralu lacemaking, having studied lacemaking while also watching the older women (mother and grandmother) in her family weaving it. 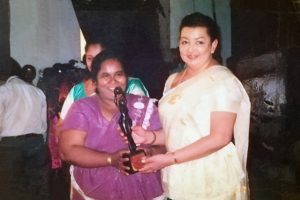 She has contributed to the project with the help of the HSBC Bank and SAP Sri Lanka to develop this beeralu lace culture and trade and also initiated an exhibition at Galle face Hotel to brings more attention to the beeralu lace industry after Tsunami.

She has given more than 500 employment opportunities to the housewives in  the southern province. After getting the training these housewives  have started to produce their own lace creations  and sell them to Priyani. It is an additional income to their families.

She also conducts classes at her workshop, for young girls and women who are interested in learning how to weave beeralu, because she feels that it is important to pass down knowledge of the traditional craft to others who can continue the tradition.

Priyani has also initiated another project in collaboration with the  Social Service Department Southern province, to  train around 30 women for  the beeralu industry. 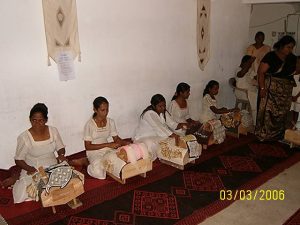 Many of these women are the wives of fishermen and they were very eager to learn as it is a means to earn more income for their families. Over the time, these women passed down the knowledge of the craft to the younger women in their families, and even now, beeralu lacemaking is the family craft or trade of most of the lace makers.

Priyani has also shared  her knowledge with all the generations by writing the book of “ Geththamaka Viskam” People who are  interested  to learn about the beeralu lace making  can gain a wide knowledge using this book. 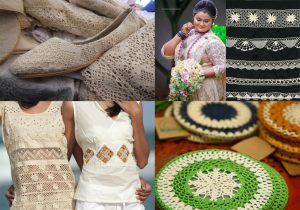 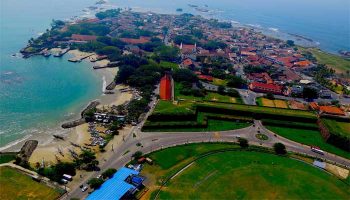 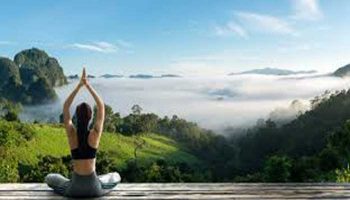 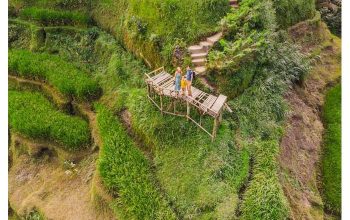 Protection of Biodiversity and Sustainability of Sri Lanka Tourism 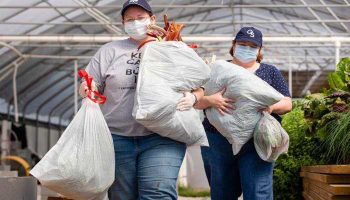